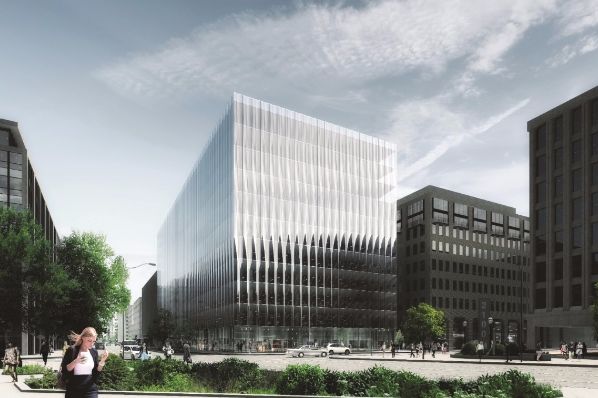 The winners of the 2017 Architectural Review MIPIM Future Projects Awards have been announced, with this year’s prizes going to projects from eight countries across 11 categories.  The successful schemes in MIPIM’s premier architectural event encompass diverse projects that are under construction or currently in planning, through to competition entries and impressive conceptual designs.
Successful project this year include a thermal bath and resort in the Baltic, a new ecclesiastical library for the Church of England, a rural women’s community centre in Turkey and a ‘dematerialising’ office building in the US Capitol city, all demonstrating the dynamism and creativity at the heart of the architectural professional internationally.
REX Architecture scooped the Offices prize for the currently under construction 2050 M Street in Washington, DC.  Commissioned by Tishman Speyer, the 364,000 m² project will be located in the heart of Washington, DC’s central business district, between Dupont Circle and Washington Circle, and is designed to set a new standard for trophy office space in the DC market.
2050 M Street will feature a curtain wall of hyper-transparent floor to ceiling glass, with a façade composed of 900 subtly curving insulated glass panels that creates an unusual kaleidoscopic effect of repetitive transparency and reflection that both animates and ‘dematerialises’ the façade.
Meanwhile, Wright and Wright Architects design for the Lambeth Palace Library and Archive, holding the largest collection of religious books and manuscripts in Europe outside of the Vatican, was successful in the Old and New category prize.  Designed for the Church Commissioners of England, the project, currently in planning, will relocate the Lambeth Palace Library into a new multimillion pound purpose built facility in the grounds.  The building will take the form of an occupied wall rising into a compact tower, and will include a multi-functional public viewing space with views of Westminster over the river Thames.
The Retail and Leisure category was won by Steven Christensen Architecture for the Liepja Thermal Bath and Resort in Latvia.  Commissioned by Liepja City Council, the concept for this unbuilt project originate from formal associations with the role of the dome in public bath typology through architectural history, with this design seeking to undermine the conventional symbolic performance of the dome by proposing a multiplicity of domes, both upright and inverted.
A concept design for the Husame Koklu Women’s Community and Production Center in Bayburt, Turkey by Tabanlioglu Architects won the Civic and Community prize.  Commissioned by Baksi Culture and Art Foundation, the project will create a dynamic communal space in a rural north-eastern province subject to harsh weather conditions.  The building is designed to respond to the climactic and geographical conditions in the region, forming a functional and harmonious monolithic entity.   Tabanlioglu Architects were also successful in the Residential category for New York’s 118 E59th Street residences, designed to sit on the nexus of Upper East Side and Midtown.   The design concept was commissioned by Madison Equities, LLC.
The Architectural Review MIPIM Future Projects Awards celebrate 32 exemplar architectural projects from around the globe, selected across 11 separate categories and two special prizes, including an Innovation Prize and the brand new Jeu d'Esprit Prize. An Overall Winner will be revealed on 15th March 2017 during the special awards ceremony and gala dinner in Cannes, where all winning and commended projects will be recognised.
The awards ceremony takes place during MIPIM, the global property market, which usually attracts over 20,000 delegates. All award entries are published in the celebratory Architectural Review MIPIM Future Projects Awards catalogue, which is distributed to all MIPIM delegates.
The Architectural Review MIPIM Future Projects Awards are organised in participation with EMAP, and are supported by Bespoke, World Architecture Festival and INSIDE, with FTI Consulting as the official communication partner.