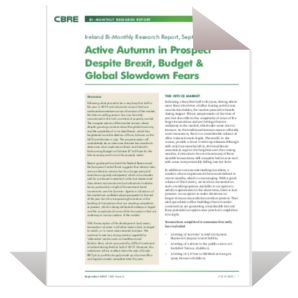 Commercial property specialists CBRE Ireland has released their latest bi-monthly property market report for September 2019.
According to CBRE, the occupier sectors of the Irish market remain robust despite concerns about the global economy and the possibility of a ‘no-deal Brexit’, which have heightened since the election of Boris Johnson as the UK Prime Minister in July. CBRE say that the property sector will be on alert over the next two months to determine what implications Brexit and Ireland’s forthcoming Budget on October 8thwill have for the Irish economy and in turn the property sector.

According to Marie Hunt, Executive Director & Head of
Research
at CBRE Ireland
“Despite all the noise, recent guidance from both the Federal Reserve and the European Central Bank suggests that interest rates are now likely to remain low for a longer period of time than originally anticipated, which in turn bodes well for continued investment in the real estate asset class where income returns look attractive in relative terms, particularly in light of Government bond movements over the Summer. As the Autumn season commences, agents in all sectors of the market are confident about prospects for the rest of the year but all are expressing frustration at the backlog of transactions that are awaiting completion, which is being attributed to delays in legal and the complexity of some of the transactions that are underway in various sectors of the market”.