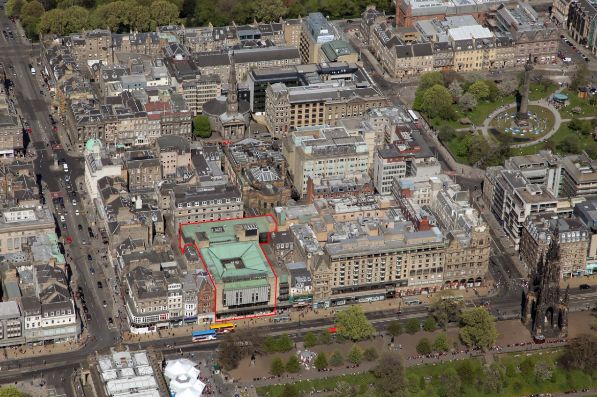 LaSalle Investment Management (“LaSalle”), one of the world's leading real estate investment managers, acting on behalf of a pension fund client has revealed plans for a major redevelopment of the BHS store at 64 Princes Street, Edinburgh which when completed would have a value of circa €60m (£50m). The proposals include plans for improved shopping facilities fronting onto both Princes Street and Rose Street, a new hotel and ‘destination’ rooftop restaurant and bar. The BHS store still trading in Administration but is thought likely to close in the near future with the potential loss of 50 jobs.

The property is made up of two buildings, one fronting Princes Street and one fronting Rose Street, connected by a bridge and basement under Rose Street South Lane. Together the buildings provide 11,334m² (122,000ft²) of floor space, however most of the upper floors have been empty or used as storage for many years. The store was built for BHS between 1964 and 1971 and was Category B Listed in 2008.

LaSalle has lodged a pre-application notification with City of Edinburgh Council for a comprehensive redevelopment that would retain a flagship retail store within the existing Princes Street building, trading from the same basement, ground and first floor space as BHS, and create new shops or restaurants in a new building on Rose Street. The mainly redundant upper floors would be converted to hotel use and the roof of the Princes Street building could host a new ‘destination’ rooftop restaurant and bar with function space and a south facing terrace overlooking Princes Street, both with entrances on Rose Street.

The rooftop restaurant would provide residents and visitors with some of the city’s best views in Scotland with panoramic views of the Castle and the iconic Old Town skyline.

It is hoped that a planning application could be lodged early in 2017 with completion of the scheme in 2019 and it is estimated that the proposal could generate over 250 jobs. The development would be delivered by the same team that brought to Edinburgh Harvey Nichols and Multrees Walk, which has become the leading luxury goods location outside London.

Steve Spray, Fund Manager, LaSalle Investment Management, said: “Princes Street is one of the finest streets in the world and our aim is to make it even better. These proposals would strengthen the shopping offer on Princes Street and create a destination restaurant and bar to add to the range of fine dining facilities the city already has. We are confident this would give residents more reasons to shop in and visit the city centre. The new hotel would also bring empty space back into good use and the development could create more than 250 jobs to replace the 50 that would sadly be lost by the closure of BHS.

“We have already received interest from major fashion retailers for the redeveloped Princes Street store and from high quality hoteliers for the upper parts of the development, so these proposals could move forward quickly. The BHS store is still trading for the time being, but this might not continue for long.

“The rooftop restaurant opportunity has also attracted interest from some leading international restaurateurs and would create a venue with one of the best views in the world. I have no doubt that this could become a “must do” destination for visitors to the city and would also be popular for media covering major events in the nation’s capital."