Managing Director of Leslie Jones since 2013, James has been with the firm since 1993 and provides both clients and the team with a consistent point of management, leadership and project direction. His portfolio includes the design and build of London Designer Outlet in Wembley, complete refurbishment of intu Victoria Centre in Nottingham and extension of intu Eldon Square in Newcastle. James holds a Diploma in Project Management from the Royal Institution of Chartered Surveyors, a Master of Business Administration in Construction and Real Estate and is a member of the Royal Institute of British Architects. 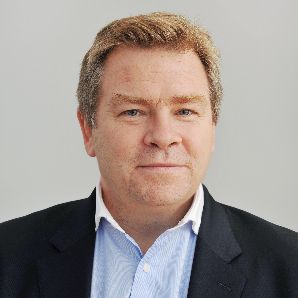 Friars Walk in Newport and Moor Market in Sheffield have been very highly praised. Is there anything unique about these schemes that sets them apart from other retail or council-led schemes?

I think Newport sets itself apart by being exactly the right size scheme. It’s got the right content and the right mix, and what we found when we were working with Queensberry Real Estate – once they’d been appointed by the council – is that having discussions with retailers, the caterers and the leisure operators was very easy. They could see the scheme, so we hadn’t undercooked it and we hadn’t tried to make something too big. I think the balance between the right amount of public realm and being a covered but not enclosed centre, so it’s not air-conditioned, [thus] keeping the cost of occupation down so that the service charges are affordable – all of those things play into making it easier for the leasing to happen. Therefore, by getting the right tenants you create the right sense of place which all has to be wrapped in good architecture, good public realm, the right size buildings and so on. I think there are lots of little factors, you pull those all together, and that’s really why Newport works.

The Moor is something different. The architecture of the building itself is stunning and delivers a real sense of place, but it was just the right size market. It brought life to the Moor as a place that was declining and heading downwards. With the basic fundamentals of the Moor where it’s all under one ownership with Aberdeen Asset Management, the local authority was willing to make things happen by investing in the public realm and pushing the higher-quality finishes throughout the public realm first, so you can see the improvement straight away. Because it’s in individual, smaller blocks, Aberdeen can pick them off one by one so we can do the first piece with the market and bring more value into the retail space. We’re now onto the next block with the cinema, catering, a big anchor store for Primark and associated retail alongside that, and then there’s a further phase that will come onstream next year. Since the basic infrastructure is there and the lot sizes are just right, you can work your way around the existing assets in a phased and scalable way; that’s why the Moor works, from my point of view. The glue that set that all together was the local authority getting along with the market, putting the public realm in and providing that campus for us to work on.

What kind of experience have you had when cooperating with local councils on a scheme?

We’d been working away at Friars Walk, our scheme in Newport, which died just into the recession, and the project ceased. What we did then was engage with the Newport city council and work up a scheme to reshape the Newport town city centre and to have the right content to be able to put the scheme back out onto the market and gain some interest. While they selected a development partner [Queensberry Real Estate], the biggest and bravest thing the Newport city council actually did was to borrow from the government and fund the scheme themselves, because they really believed in this scheme. The Debenhams, the new restaurants and retailers – they’re exactly what was needed to help the regeneration attract the right businesses and the right people to make everyone comfortable with the offer and be happy to relocate etc. The Newport city council was absolutely convinced it was the right thing to do. They put their hands in their pocket to do it, and I think it’s been an absolute success. It’s been a real blueprint for that particular opportunity and that particular locality, though this doesn’t work everywhere.

We work in lots of towns and city centres where sometimes the local authorities aren’t seeing and aren’t trying to open up the opportunity for development. A lot of our schemes are still underwater because rent is still suppressed and construction costs are inflated. I think local authorities have a massive role to play, to provide funding or be able to put the land in, to produce section 106s [planning agreements/arrangements], and to actually stimulate and make these developments happen. We’re starting to see it in Sheffield where we’re working on the next phase of the Moor for Aberdeen Asset Management. We engaged fully with the local authorities and we built them a market building, in conjunction with retail alongside. It’s the same building, the same contractor, but we’re working in conjunction with the local authorities who actually deliver the new market to the city centre. We’ve found Sheffield city council are a very open and welcoming local authority that actually wants to make things happen, which makes our lives and our clients’ lives that much easier.

What do retail regen schemes have to offer over traditional regeneration schemes?

To me, it’s about placemaking and delivering the character of a town or city. People have more leisure time and shopping is now a leisure activity. When going to the shops there’s a lot more leisure content involved, it’s all about the experience of the place. We’re dealing with a little town in the west and the local authority’s take on regeneration there is to create jobs through new industries. What they don’t understand is that for the high-earning and top-end consumers you’ve got to provide the right environment in your town and city centres to attract those kinds of people. You’ve got to have the right offer, and that’s why retail and leisure is key to the regeneration, not just the jobs and the office space that you’re building and the tax breaks that you’re giving to bring business into your locality. It’s about the centre of the place, what the town is going to be, and what it is going to offer these new people that you’re trying to attract.

Is retailtainment something you take into account when planning a new scheme?

I think it’s becoming more and more vital, we tend to call it ‘curated.’ We provide curated retail, ever-changing retail where you visit your centre month-on-month and the offer changes. It’s exciting and it’s new, and that’s shoppertainment; it’s about engaging and making it different. Every time someone visits, it’s a slightly different experience. Now, you have to plan for that architecturally; you have to have the right space to make that happen, you have to think about that early on in your design process. One scheme that I always talk about is Bikini Centre in Berlin, which I think is a really good blueprint for how you might bring forward interesting and exciting retail. It’s got traditional retail, but it’s also got that temporary popup facility that enables retailers to come in for four weeks, two weeks, one week, maybe even three days and to trade in that environment; I think blending that with traditional retail is definitely a way forward. We can all shop on the internet and we can all fulfil our needs on the internet, but I think places now are more and more about satisfying people’s wants and not necessarily their needs. I think evolving spaces that change on a regular basis are another way of drawing people in, and that comes down to street food and other offers that can complement that ever-changing face of where you’re bringing people.

Leslie Jones Architecture is an international leader in urban design and masterplanning. The firm’s highly skilled team of architects, masterplanners and interior designers create community destinations on a global playing field that are both creative and functional. The team’s architectural flair is complemented by their expert technical knowledge and experienced insight into the commercial requirements of a scheme – resulting in smart design with personality. Some of their most recent projects include Al Maktoum International Airport in Dubai, Expobel in Minsk and The Moor in Sheffield.