Foundation stone laid for ONE tower in Frankfurt (DE) 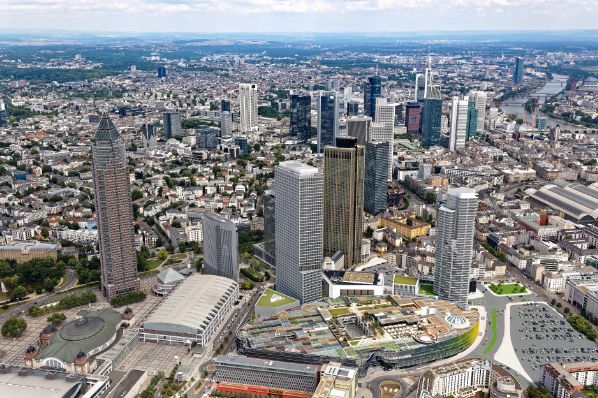 CA Immo, together with representatives of the city of Frankfurt, the hotel tenant NH Hotel Group, the architects Meurer Generalplaner and the shell manufacturer Hochtief Building, laid the foundation stone today for the ONE office and hotel tower. The 190m building will be near the Friedrich-Ebert-Anlage, between the banking district and the exhibition grounds. ONE is scheduled to be completed at the end of 2021. CA Immo has invested in the project c.€330m.

The project will comprise 85,000m² of GLA spread over 49 floors. The planned four-star superior hotel will span the ONE’s lower 14 floors and will have 375 rooms. The highlight for both hotel guests and office users will be the Skybar on the top floor, also operated by nhow. The publicly accessible bar will be one of a kind in Frankfurt and offer a 360-degree panoramic view of the city and the Taunus mountains. In addition, the hotel will have a large conference centre in excess of 1,000m² as well as a restaurant, bar, and fitness areas which will also be available to office tenants.

As early as the beginning of 2018, ONE became the first high-rise in Germany to receive a WiredScore Platinum certification.

City council member Jan Schneider, responsible among other things for construction and real estate, said: "ONE will enrich the Frankfurt skyline not only with 190m of impressive architecture but also with many new jobs. It will thus strengthen the booming Europaviertel, which has become one of the most important urban development projects in Germany within just one decade."

Michael J. Morgan, Managing Director of CA Immo Deutschland GmbH and Head of Business Operations, commented: "ONE’s innovative usage concept captures the spirit of the times. In addition to a central and urban location, our customers expect a building that can react extremely flexibly to their requirements – both in terms of space and additional services."